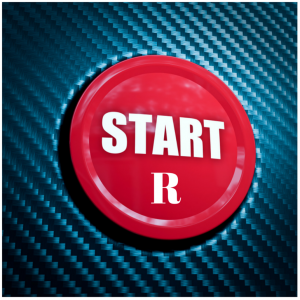 You’ve chosen R as your tool for getting started learning data science and machine learning. If you are coming from a background on the Microsoft technology stack, your decision to choose R was affirmed by the recent announcement that Microsoft acquired Revolution Analytics, a leader in the R world.

Download and install R from CRAN, The Comprehensive R Archive Network. You’ll find installers for Mac, Windows, and Linux. I’ve installed on both Mac and Windows. They are both simple and straightforward.

Next, download and install R Studio. Even if you are a command-line person who thinks that IDEs rot the mind and inhibit true learning of a new language, trust me–you will still be writing R code in a Notepad-like experience and the integrated help, plots, and data views make R Studio a must-have. Just like R, R Studio is a a straightforward instal on Mac or Windows.

While you’re at it, download a copy of Introduction to Statistical Learning with Applications in R and The Elements of Statistical Learning. Two of the best data science books on the R platform are made freely available by the authors in electronic format!

Sorting out the difference between Windows CE and Windows Mobile is the key to understanding the platform versioning (which can be very confusing). Here it is in a nutshell…

Windows CE is a set of modules that Microsoft releases for hardware vendors to build operating systems custom for their devices. Because these devices are so resource constrained, manufacturers don’t want to put any functionality on them that isn’t necessary.

It turns out that there are a whole bunch of devices that need about the same functionality, namely smart phones and PDAs. Instead of having each smart phone and PDA manufacturer build their own version of CE and add in all of the niceties that are needed to be productive on those devices, Microsoft offers Windows Mobile. In other words, Windows Mobile releases are instances of Windows CE specifically built for handheld devices.

With Windows Mobile 5 and 6 (which are found on most devices today), there are three flavors: Pocket PC without phone (classic), Pocket PC with phone (professional), and Smartphone (standard).

Wikipedia has a decent breakdown of the various combinations.