It was just over a year ago when I started talking to small company in Columbia, SC about heading up their Engineering team. They were a .NET shop–right in my wheelhouse. All I had to do was pick up the insurance domain and figure out what predictive analytics and machine learning are all about.

Technically, I didn’t have to understand machine learning because the company has a core research team that develops and maintains algorithms. I would lead the team that turns those algorithms into great software solutions and user experiences for the insurance industry. Of course, no engineer worth his salt is going to be content to treat the heart of his system as a mysterious black box. So, for me, taking the job meant diving into machine learning, which I knew nothing about. As I spent the previous five years building mobile and web field service automation solutions, I knew “big data” was a hot topic, but I had missed the rise to prominence of predictive analytics and the whole Data Scientist craze—the sexiest job of the 21st century. 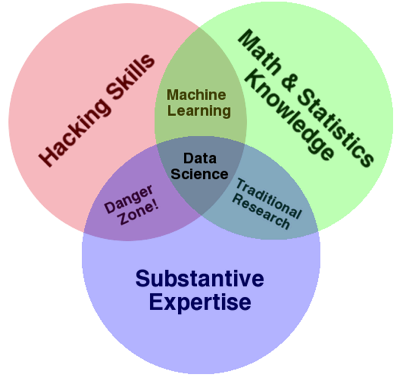 I’ve spent two and half decades filling in the red circle. As a Domain-Driven Design adherent, I’ve always committed myself to learning the domain my software is designed for—in this case insurance. However, I hadn’t given serious thought to higher math and statistics beyond batting averages and occasionally having to remind myself how obscure three sigma outliers are. I enjoyed these subjects in college, but left them behind as i built systems where the most complicated math could be done by a middle schooler. Sure, cryptography has some interesting math, but we rely on libraries for that.

I’m going to use this space to chronicle my journey from a transactional business system developer to a data scientist—or at least a machine learning/predictive analytics specialist. I’m early in the journey, but I’ve made enough missteps as well as positive steps that I can help others looking get into the predictive analytics space.